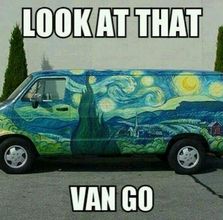 Most of these jokes were found browsing the internet. If you know of a good one send it to web@tlas.org.au 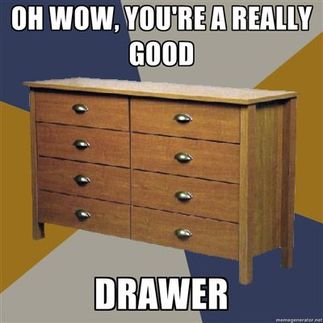 Vincent van Gogh walks into a bar, and the bartender offers him a drink…
No thank you, said Vincent, I’ve got one ear


After his wife divorced him, Joe asked his best friend, Bill, to fix him up with a blind date. Bill obliged. The next day Joe called up Bill and shouted at him angrily: "Bill, what kind of a guy do you think I am. That girl you fixed me up with was cross-eyed; she was almost bald; her nose was long, thin and crooked; she had hair growing on her face; she was flat chested; and her ankles were as thick as her thighs".
Bill answered: "Either you like Picasso, or you don't like Picasso."


There was this world famous painter. In the prime of her career, she started losing her eyesight. Fearful that she might lose her life as a painter, she went to see the best eye surgeon in the world.After several weeks of delicate surgery and therapy, her eyesight was restored. The painter was so grateful that she decided to show her gratitude by repainting the doctor's office.
Part of her work included painting a gigantic eye on one wall. When she had finished her work, she held a press conference to unveil her latest work of art: "The Doctor's Office".
During the press conference, one reporter noticed the eye on the wall, and asked the doctor, "What was your first reaction upon seeing your newly painted office, especially that large eye on the wall?"
To this, the eye doctor responded, "I said to myself 'Thank God I'm not a proctologist.'"


Artist Pablo Picasso surprised a burglar at work in his new chateau. The intruder got away, but Picasso told the police he could do a rough sketch of what he looked like. On the basis of his drawing, the police arrested a mother superior, the minister of finance, a washing machine, and the Eiffel tower.
How many artists does it take to change a light bulb?
Ten. One to change it, and nine to reassure him about how good it looks.

Three Black Men
​At the National Art Gallery in Dublin, a husband and wife were staring at a portrait that had them completely confused.
The painting depicted three black men totally naked sitting on a park bench. Two of the figures had black willies, but the one in the middle had a pink willie.
The curator of the gallery realized that they were having trouble interpreting the painting and offered his assessment.
He went on for over half an hour explaining how it depicted the sexual emasculation of black men in a predominately white, patriarchal society.' In fact,' he pointed out,' some serious critics believe that the pink willie also reflects the cultural and sociological oppression experienced by gay men in contemporary society.'
After the curator left, an Irishman, approached the couple and said,' Would you like to know what the painting is really about?'
'Now why would you claim to be more of an expert than the curator of the gallery?' asked the couple.
'Because I'm the guy who painted it,' he replied.
'In fact, there are no black men depicted at all! They're just three Irish coal miners. The guy in the middle went home for lunch.'

Create your own unique website with customizable templates.
http://www.tlas.org.au